The inaugural Humanitarian Index was commissioned by the Aurora Prize and conducted by Edelman Intelligence between March and April 2016. Interviews with 4,600 individuals were conducted online across six countries: France, Germany, Iran, Lebanon, U.K. and U.S. The sample was representative of the general population in terms of age, gender and location in the U.S., U.K., France and Germany. It was representative of the online population in Lebanon and Iran; meaning the sample in those countries over-represents educated men. 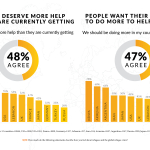 The third annual Aurora Humanitarian Index today reveals that over half (52%) of people regard risk of war as the most pressing global humanitarian challenge facing humanity right now, compared to just 41% in 2017.  At 58%, terrorism remains people’s greatest humanitarian concern today, although this is down five points from last year. At a time of such uncertainty and fear, many are experiencing crisis overload with 61% of people saying there are too many humanitarian crises to keep up with in the world today. 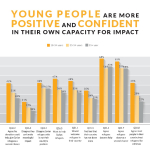 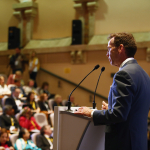 The Aurora Prize for Awakening Humanity unveiled the results of the first annual Humanitarian Index, a global study of the top humanitarian issues, their causes and who is best positioned to address them at the Aurora Dialogues conference in Yerevan, Armenia. The 4,600 respondents in the U.S., U.K., France, Germany, Lebanon and Iran all cited terrorism as the number one most pressing humanitarian challenge now and for the next five years, followed by forced migration.